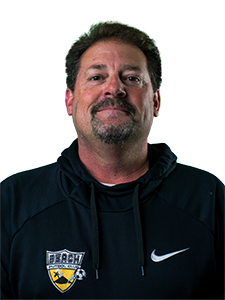 Tuttle, who begins his 23rd year on the sidelines for the Toros with the men’s program, has been instrumental in the overall success of making the CSUDH program one of the finest in the country, including an assistant coaching role on the men’s 2008 and 2000 NCAA Championship squads, and the 2009 women’s NCAA finalist team, with whom he served as an assistant coach for 13 seasons.

Jeff was the head varsity boy’s coach at South Torrance High School from 1988-2004, where he guided the Spartans program for 17 years.

He enjoyed unprecedented success at the helm with a 253-132-50 overall record and an impressive 137-45-20 record in Bay League play, leading South to the CIF playoffs 14 of 16 years, including a streak of 12-consecutive years to tie a school record.

Tuttle led the Spartans to four CIF quarterfinal and two semifinal appearances as head coach, capturing the Bay League Championship nine times. During his tenure, Tuttle was named the Bay League Coach of the Year nine times and the South Bay Daily Breeze Coach of the Year three times (‘98, ‘00 &’04). In 1995 and 2003, Tuttle was selected to coach the CIF All-Star game, where his team emerged victorious both times. In 2002, his Girls U-17 club team was crowned California State Cup Champions.

Coach Tuttle is a graduate of CSUDH with a degree in Business and is married to Leslie (Contreras). Together, they have two daughters and a son – Ashley, a graduate of Cal State Dominguez Hills, Kylie and Jack.

The Tuttle clan resides in Torrance.